The Inlaid Brass Ewer, signed by ʿAli ibn ʿAbdallah al-ʿAlawi, currently sits at the Museum of Islamic Art at the Pergamon Museum in Berlin, Germany. This 35 centimeter high jug can be dated back to the 13th century, during the Ayyubid dynasty, from about 1251-1275. It was produced in Mosul, in northern Iraq, a place that was known for its beautiful metalwork. 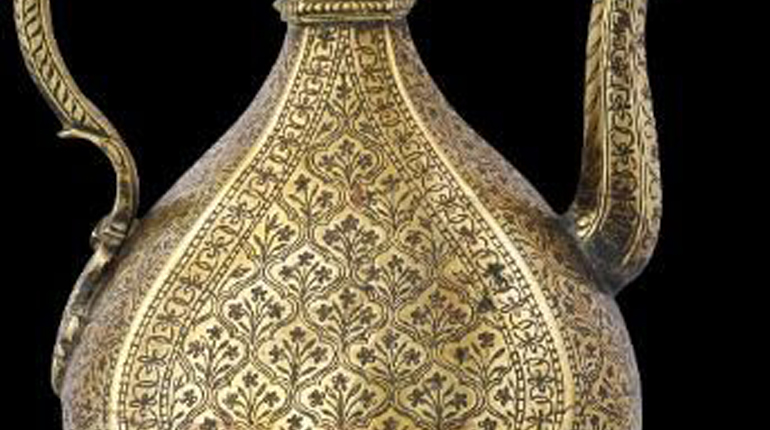 The Inlaid Brass Ewer was used along with a basin, also signed by ʿAli ibn ʿAbdallah al-ʿAlawi, and both were most likely owned by a member of the higher class to wash their hands before dining at court. This ewer, along with a group of other inlaid brasses, can be associated with Mosul because of the abundance of artist signatures.

The workshops of Mosul were known to have the finest bronzes, including ewers, basins, candlesticks, and others. These bronzes were inlaid with silver and gold, and were decorated with intricate designs and inscriptions. While the technique of metalworking originated in Persia, the trade routes in Mosul shaped it. The earliest use of metalworking was with copper, but with the addition of zinc, copper became brass. In Islamic areas, brass was used to make large braziers and dishes, but soon became proficient in creating ewers, basins, and other bronzes. These would then be decorated with gold and silver through the technique of inlaying. The process of inlaying a precious metal on top of a less precious one is evident on most of the bronzes that came from Mosul.

A group of craftsman centered in Mosul created the Mosul school, which created an improved way of inlaying metals. This technique would bypass the earlier method of inlaying, especially when it came to silver. Strips of silver and gold were placed on undercut bronze and brass pieces in a way that when finished would show no irregularity. This technique was later brought to other cities, including Damascus.

The technique of Damascene, named after the city of Damascus, involved the metal being inlayed to be softer than the substrate metal; the look was created by hammering the metal into an undercut hard metal. By hammering in strips of gold and silver, the brass ewers had predetermined patterns that were decorated. The Inlaid Brass Ewer's patterns and inscriptions include thrones, riders, and planets with their zodiac signs, and are inlayed with silver and gold. The motifs and metal choices are very common for Mosul metalwork.