The initiator of the Mughal gardens in India was Zaheeruddin Babur who had witnessed the beauty of Timurid gardens in Central Asia during his early days. In India, Babur laid out the gardens more systematically. Fundamentally, the Mughal gardens have had edifices in a symmetrical arrangement within enclosed towns with provisions for water channels, cascades, water tanks and fountains etc. 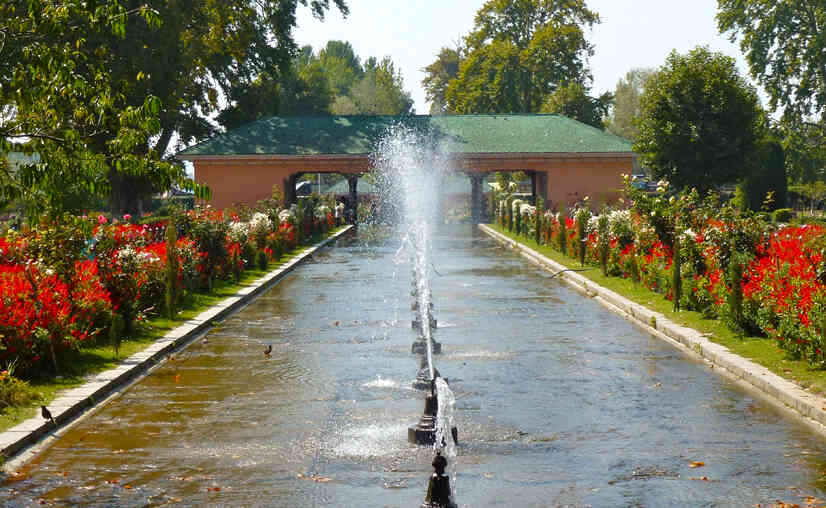 Thus, the Mughals maintained the tradition of building fourfold (chaharbagh)-symmetrical garden. Babur, however, applied the term chaharbagh in its widest sense which includes terraced gardens on mountain slopes and his extravagant rock cut garden, the Bagh-i Nilufar at Dholpur.

After Babur, the tradition of building chaharbagh touched its zenith during the time of Shah Jahan. However, modern scholars are now increasingly questioning the excessive use of the term chaharbagh in the interpretation of Mughal gardens, since it was not always symmetrical. This view finds archaeological support also. The excavated Mughal garden at Wah (12 kms west of Taxila), near Hasan Abdal, associated with Mughal emperors Akbar, Jahangir and Shahjahah reveals that the pattern and overall design has not been symmetrical on the first and second terraces.

As for location, the Mughal emperors were much particular in selecting places of great natural beauty. Often they selected mountain slopes with gushing water to layout gardens, the finest example being Bagh-i Shalamar and Bagh-i Nishat in Kashmir, Shalamar garden at Lahore and Mughal garden at Wah (Hasan Abdal) etc.

Almost all the Mughal gardens contained some very important buildings like residential palaces, forts, mausoleums, mosques etc. The gardens became an essential feature of almost each kind of Mughal monuments and were inter related to these monuments which can be categorized as: (i) Gardens attached with Imperial palaces, forts and gardens which beautified private residential buildings of the nobles (ii) Religious and sacred structures i.e., tombs and mosques erected in the gardens, and (iii) Resort and public building in the pleasure gardens.

Like Persian and Central Asian gardens, water became the central and connecting theme of the Mughal gardens. Water played an effective role in the Mughal gardens right from the time of Babur. He was more interested in ‘beauty’ than ‘ecclesiastical prescription. The beauty of Babur’s classic chaharbagh was the central watercourse and its flowing water. Most of these gardens were divided into four quadrants by two axis comprised with water channels and pathways to carry the water under gravitational pressure. At every intersecting point, there used to be a tank. In India, the early gardens were irrigated from the wells or tanks, but under the Mughals the construction of canals or the use of existing canals for the gardens provided more adequate and dependable water supply. Thus, the most important aspect of the waterworks of gardens was the permanent source of water supply. The hydraulic system needs enquiry about the ‘outside water source’ as well as ‘inside distribution of water’ in the paradisiacal Mughal gardens. The principal source of water to the Mughal gardens were: (i) lakes or tanks (ii) wells or step-wells (iii) canals, harnessed from the rivers, and (iv) natural springs.

The fountain was the symbol of ‘life cycle’ which rises and merges and rises again. The Paradise possessed two fountains: ‘salsabil’ and ‘uyun’. 131 Salih Kambuh , a native of Lahore, described very artistically the water system and its symbolic meaning in the garden of Shalamar at Lahore that ‘in the center of this earthly paradise a sacred stream flows with its full elegance and chanting, fascinating and exhilarating nature and passes through the gardens irrigating the flower beds. Its water is as beautiful as greenery. The vast stream is just like clouds pouring rains and opens the doors of divine mercy. Its chevron patterns (abshar) are like an institution of worship where the hearts of believers are enlightened. The Mughals developed hydraulic system by using Persian wheel to lift the water and obtained adequate pressure necessary for gardens. The main reason behind the location of gardens on the bank of river was that water was raised to the level of the enclosure wall by Persian Wheel standing on the bank from where it was conducted through aqueduct, to the garden where it ran from the top of the wall in a terra-cotta pipe which also produced adequate pressure needed to work the fountains.