Mughal Inlay art is a remarkable feature of Mughal architecture in India and Inlay art was an instrument of dynamic expression in the great age of the Mughal Empire. The Monuments of Agra(India) provide the different stages of the development of Mughal Inlay art in a progressive sequence during sixteenth to seventeenth century as practiced under Akbar (r. 1556-1605), Jahangir (r. 1605-1627), and Shah Jahan (r. 1628-1658). This research paper will present probable aspects related to the origin and development of Mughal Inlay art. Marble inlay-‘Pachchikari’ or ‘Parchinkari’ is one of the most beautiful and popular forms of Mughal art developed indigenously in India. It is to be believed that it is typically Italian in origin and some contend it to be of the Indian origin itself. Inlay technically known as Pietra dura (Italian for "hard stone") is marble inlaid with designs in precious or semi-precious stonework. The present paper attempts to establish from written sources the possible interconnection between the inlay work during Jahangir period and its development. The Mughal Inlay art’s origin is in India and it developed indigenously as it relied on several key aspects. Ram Nath, Ebba Koch, E.W Smith, V.A. Smith and Major Kole explore some elements of the origin and development of inlay work. The findings show that it is not only an indigenous Indian art and but also that it developed rapidly during the reign of Jahangir. The points came from the visit of Jahangir in Mandu (India). When Jahangir visited Mandu, the fascinated inlay work there impressed him and as the continuous refinement of inlay work can be seen in the Jahangir buildings i.e. from Akbar’s Tomb to Salim Chisti’s Tomb and ultimately a remarkable change in the Tomb of Itmad-ud doulah. 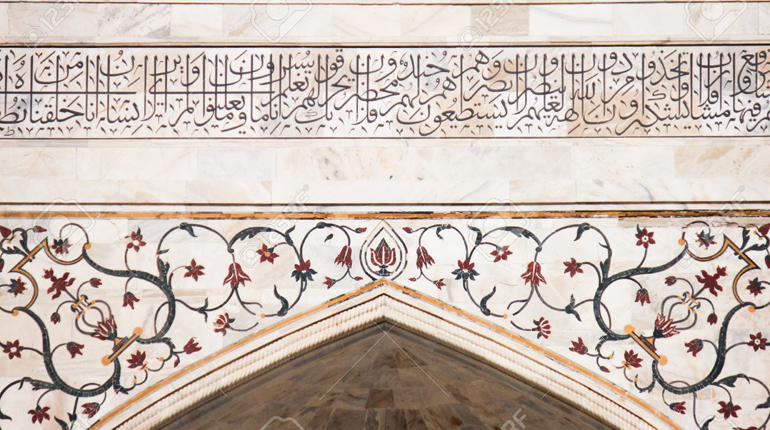 Mughal Inlay art is a remarkable feature of Mughal architecture in India and Inlay art was widely appreciated and debated with respect to its origin and development.

In India it developed in different stages during sixteenth and seventeenth century as practiced under Akbar (r. 1556-1605), Jahangir (r. 1605-1627), and Shah Jahan (r. 1628-1658). Inlay technically known as Pietra dura (Italian for "hard stone") is marble inlaid with designs in precious or semi-precious stonework, such as onyx, jasper, carnelian, etc. cut into thin slices and neatly bedded in sockets prepared in the marble . It is not surprising that the buildings Marble inlay-Pachchikari or Parchinkari is one of the most beautiful and popular forms of Indian Mughal art and developed indigenously here. Mughal Inlay art is not an isolated phenomenon; it might have traveled over long distances before having been introduced into India and before being adopted in such a refined way by the Mughals . Some believe it to be typically Italian in origin and others believe it an indigenous Indian art. The present paper tries to find out the possible link and development of inlay work during Jahangir’s period.

The Origin of Mughal Inlay Art

Inlay work particularly on marble or pietra dura, generated a lot of debate as far as its origin is concerned. Some argue that the inlay art is Italian in origin and Indian artisans accomplished adapted it to their needs, gave it an indigenous touch and used the technique to carve out traditional Indian motifs that are today the crown of Indian art. Some believed it is developed slowly in India as we can observe the differences found in the inlay work of the buildings of Akbar to Jahangir and than Shah Jahan. A continuous development in Inlay art can be seen in Jahangiri Mahal (Plate No 1) to Akbar’s Tomb (Plate No 2, 3) and then in Tomb of Salim Chisti and Itmad-ud- Daulah’s tomb(Plate No 4, 5, 6). The tomb of Itmad-ud –Daulah supplies a link between two important phases, namely those of Akbar and of Shahjahan. It is the first notable building in white marble with its rich ornamentation in pietra dura that provides the impression of a miniature precious object magnified into a piece of architecture. It represents the transition from the red sandstone phase of Akbar’s buildings with their direct simplicity and robustness of structural design to that of sumptuous marble with all the changes. 3 Nath emphasizes that the Mughal monuments built during the period of different emperors having inlay work is an indigenous art and, moreover, developed form of mosaic, which has been further divided into two styles. The first style was different geometrical shapes of stones of different colours were assembled and arranged in such a way to form a pattern on a plaster surface or on a stone slab. The other was the inlaid style in which thin pieces of semi-precious stones were laid in sockets specially prepared in a sand stone or marble slab4 (Nath, 1970, 29). The first style can be seen in geometrical shapes of mosaic work in Buland Darwaja of Fatehpur Sikiri, Jahangiri Mahal of Red Fort and in the Akbar’s tomb at Sikandara. The example of other style can be observed in the interior and the exterior of the Itmad-ud –Daulah’s tomb(Plate No 5,6), Salim Chisti’s tomb and in the exterior of the Taj Mahal (Plate No 7). The early example of this art has been found in the Chaumukhi Jain Temple (A.D. 1438) at Ranpur, the Qila –i-Kuhna mosque (A.D. 1542) in the old fort at Delhi, Humyun’s tomb (A.D. 1565) in Delhi5 . The buildings of Akbar- Delhi gate of Agra Fort (A.D. 1566), western facade of Jahangiri Mahal (Plate No 1), Jami Maszid, Buland Darwaja (A.D. 1565-70) at Fatehpur Sikiri exhibit almost the same style. In Jahangir reign, Akbar’s tomb (A.D. 1605-12) had applied inlay art in refined manner and Salim Chisti tomb, Itmad-ud-Daulah tomb (A.D. 1627) had reached near to a stage of perfection. According to E.W. Smith, the Itmad-udDaulah’s tomb has both mosaics in coloured marbles and inlaid work, but after Jahangir period the mosaic ornamentation gave place entirely to inlaid decoration6 . Inlay work on precious stone began in the workshops of Florence in Italy around the end of the sixteenth century. Ebba Koch strongly supports Pietre dure is an Italian origin and has European influences. She says: ‘The Italian Pietre dure panels are embedded in a white marble surface…’7 and observes European forms are integrated and transformed in Mughal court art. Whereas Nath says that Mughal inlay art is a developed Indian art and the Orpheus Plaques which are the solitary example of Florentine Pietre dure, were imported ready made and placed in the Throne- Balcony of the Diwan-i-Am of Red Fort Delhi between 1707, after the death of Aurangzeb, and 1824, when Bishop Heber saw http://www.anistor.gr Anistoriton Journal, vol. 11 (2008-2009) Art 3 them there for the first time, and mentioned them in his travelogue.8 We can conclude that the mughal Inlay art is originally an Indian art as the earliest example of Inlay art can be seen in Chaumukhi Jain Temple (A.D. 1438) at Ranpur and the Qila –i-Kuhna mosque (A.D. 1542) in the old fort at Delhi, Humyun’s Tomb (A.D. 1565) in Delhi; and pietra dure technique came in India after seventeenth century.

The Development of Mughal Inlay Art

To recapitulate briefly the three major points about the visit of Jahangir at Mandu that have bearings on the origin and development of the Mughal Inlay art are the following: Firstly, when Jahangir visited Mandu, the fascinating inlay work of Mandu impressed him and as the continuous refinement of inlay work can be seen in the Jahangir buildings i.e. from Akbar’s Tomb to Salim Chisti’s Tomb and, ultimately, a remarkable change in the Tomb of Itmad-ud Doulah. Secondly, the research also finds the possibility that there was an interaction between Mandu’s artisans and Jahangir’s architect. The other possibility can be that Nur Jahan, the wife of Jahangir, too got impressed by the inlay work of Mandu during her visit along with her husband. As a result she applied it in her father’s Tomb with much refined manner. To sum up, in Jahangir period a remarkable change can be seen in Mughal Inlay art, which is not only an indigenous Indian art but also developed rapidly in the period of Jahangir rather than Shah Jahan.